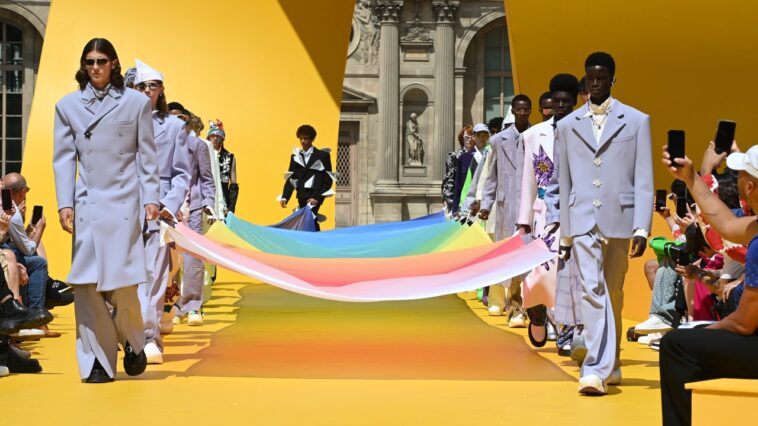 Sporting a crown of thorns, Kendrick Lamar took to the mic from the entrance row of the Louis Vuitton Males’s present in Paris as we speak to pay tribute to the model’s late artistic director, Virgil Abloh, who died in November 2021.

Lamar carried out an orchestral-backed medley of tracks from his newest album, Mr. Morale & The Huge Steppers, together with “N95,” in addition to “Savior,” “Wealthy Spirit” and “Depend Me Out,” closing out the rendition with a repeated mantra of “Lengthy reside Virgil.” (Within the video under, he seems simply earlier than the 13-minute mark.) Seated between his pgLang accomplice Dave Free and mannequin Naomi Campbell, he wore a slate-gray LV swimsuit, silver-tipped cowboy boots, and what seems to be the identical diamond-covered crown that he donned for the Mr. Morale album paintings.

As Lamar soundtracked the present’s finale, fashions carried an enormous rainbow banner down the runway, which resembled a looping curler coaster of a yellow brick street. (Abloh’s earliest Vuitton collections paid homage to The Wizard of Oz and The Wiz.) In Abloh’s stead, the complete LV males’s workforce eased on down the yellow runway to shut out the present.

Elsewhere in Europe, Lamar is about to headline the Glastonbury music pageant in England on Sunday.