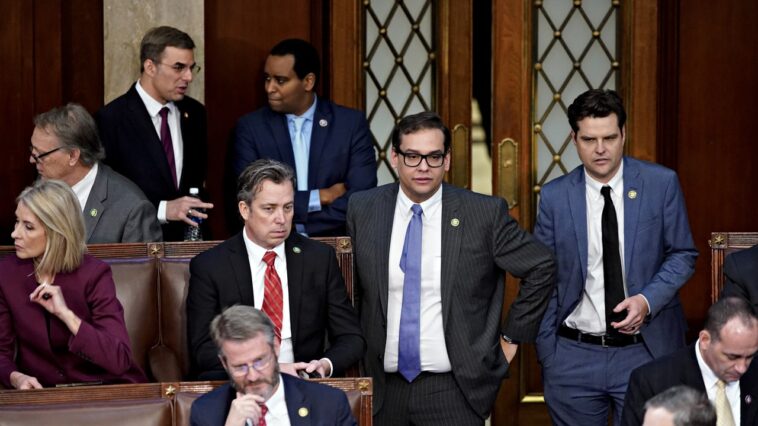 When the C-SPAN live-stream cameras float over the chamber, giving a gauzy aerial view of the Home ground, it’s like trying via a kaleidoscope, or possibly at a very depressing Hieronymus Bosch portray. This week has seen the 118th Congress sputter out on its outstanding tenth (and counting) failed vote to elect a speaker, which might be chaotic by itself. However whenever you take a look at the garments, issues are even wilder: it’s a haze of black and navy jackets and attire, milling over a royal blue carpet dotted with gold wreaths. One fish, two fish, pink tie, blue tie. Often, a bolt of vaguely bipartisan purple or yellow. “The Washington wardrobe is so standardized that any deviation from the norm stands out, particularly on TV,” writes Vanessa Friedman of the New York Instances, referring to new Pennsylvania junior senator John Fetterman’s new swimsuit. Politicians have lengthy used clothes to bolster or subvert their messages. However this week, it’s arduous to know the place to look.

That stated! It’s simple, at first, to settle one’s gaze on George Santos, the Republican representative-elect from Queens who arrived in Washington this week mired in a very bonkers internet of falsehoods. On his first day on the Capitol, Santos wore a skinny periwinkle-blue sweater below his navy jacket and principally sat alone—trying, because the Washington Submit described him, “very very similar to a freshman at a prep faculty in hell.” That day, a photographer captured him mid-yawn, face stretched in a large Ducreuxian inhale; afterward, he dedicated the Menswear Twitter fake pas of wearing a backpack over his suit. The following day, and the day after that, he donned a pair of dark-rimmed Clark Kent glasses—one other identification?—and mingled together with his new far-right friends. Based on my colleague, timepiece cognoscente Cam Wolf, on Santos’s wrist is…a Cartier Santos watch, which Forbes couldn’t resist suggesting may also be pretend.